The capacity factor is almost always lower than the availability factor, in some cases (most variable renewable energy sources) much lower. It can, rarely, be momentarily higher if the actual output of a highly available plant is higher than its nameplate capacity (which would have had to be conservatively calculated).

Sadly, variable renewable energy (solar and wind in particular) plants carry very low capacity factors, due to the intermittency of their resource (solar or wind). What this means is that a 350MW solar farm with a 20% capacity factor is equivalent, in total energy produced, to a 90MW coal plant with an 80% capacity factor. 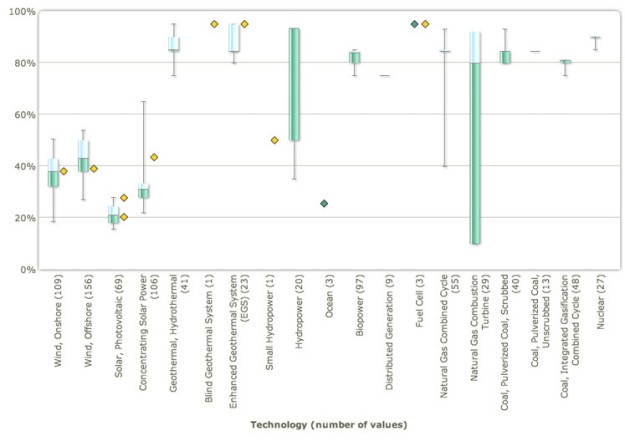 2006 DOE numbers are similar, as shown by the following table:

The reason why coal and nuclear plants remain on all the time, by the way, is that they are very difficult to turn on and off, while gas- and oil-powered plants are much easier to ramp up or down – which is why they are typically used as peaking generators when demand peaks.